Vancouver, B.C., December 2, 2020. FALCON GOLD CORP. (FG: TSX-V), (3FA: GR), (FGLDF: OTC PINKS); (“Falcon” or the “Company”) is pleased to report the Company has arranged for an $750,000 non-brokered private placement of units.  Each Unit is priced at $0.12 and consists of one Falcon common share and one non-transferable warrant.  Each Warrant entitles the holder to purchase a new Falcon common share for a price of $0.20 at any time during a term of 36 months from the date of the closing the financing.  Closing will be subject to TSX Venture Exchange approval and any shares issued will be subject to a four-month hold period.

Each of the 5 holes of the fall program was targeting and has intersected mineralization of the main mine structural trend with pierce points through the gold mineralization spaced over a 125 m strike length and at various depths.  Holes, CC 20 – 08 and – 09, were reported in our news release dated November 18th, 2020.

The mineralization in drill holes, CC 20 – 10 and – 11, consisted of chloritized and silicified host rock that was complexly veined and variably sulphide mineralized.  The veins commonly contained contorted bands of tourmaline with pyrite, arsenopyrite and fine grains of chalcopyrite.  The true thickness of the intersected mineralization has not yet been established, but in holes 20 – 10 and -11, the zone widths in core lengths ranged from 10 m to 24 m.

DDH CC 20 – 12 was drilled just west of the shaft in which the gold-bearing vein was reportedly 1.5 m (5 feet) wide.  In 2002, the shaft was sampled by staff of the Ontario Resident Geologist’s office.  Samples returned grades up to 0.44 oz/ton (13.74 grams/tonne) Au from the quartz vein and a sample of the altered quartz porphyry host returned 0.13 oz/ton (4.06 grams/tonne) Au.  The mineralization in hole, CC 20 -12, began in an altered gabbroic or mafic volcanic unit with quartz veins and stringers.  A rose coloured quartz vein marks the start of the main mine zone at the contact with a felsic porphyry at approximately 89m.  The porphyry is very strongly altered to 97.4m with tourmaline-pyrite quartz veining containing approximately 2% pyrite and 0.25% arsenopyrite and local fine-grained chalcopyrite and telluride minerals.  This is followed by 20 cm of tourmaline-quartz-pyritic (pyrite content of approximately 7%) altered volcanic and a very distinctive quartz vein from 97.6 m to 97.9 m that is banded or laminated with tourmaline, quartz and about 1% very fine arsenopyrite and pyrite, and 0.2% fine chalcopyrite and telluride that appears to have a true with of about 20 cm.  The most notable component of this vein is visible gold (“VG”) that occurs as several pin-head sized and smaller grains.  The gold was noted in both the tourmaline bands and in the white quartz bands.  Beyond the VG vein, the mineralization continued to 103.8 m and consisted of highly altered, and felsic pyroclastic rock with up to 5% pyrite and 0.1% arsenopyrite.  Hole, CC 20 – 12, was ended at a depth of 201 m.

Mr. Karim Rayani, Falcon’s Chief Executive Officer, commented, “Finding visible gold in our hole 20 – 12 is very encouraging and it further validates our geological model. Seeing VG in the mineralized sections tells us we are on the right track!  Our geologists are currently cutting samples and will be continuing to submit them for analyses and report them as they become available.”

Table One.  Summary of the technical details of Falcon’s 2020 drilling on the Central Canada gold mine. 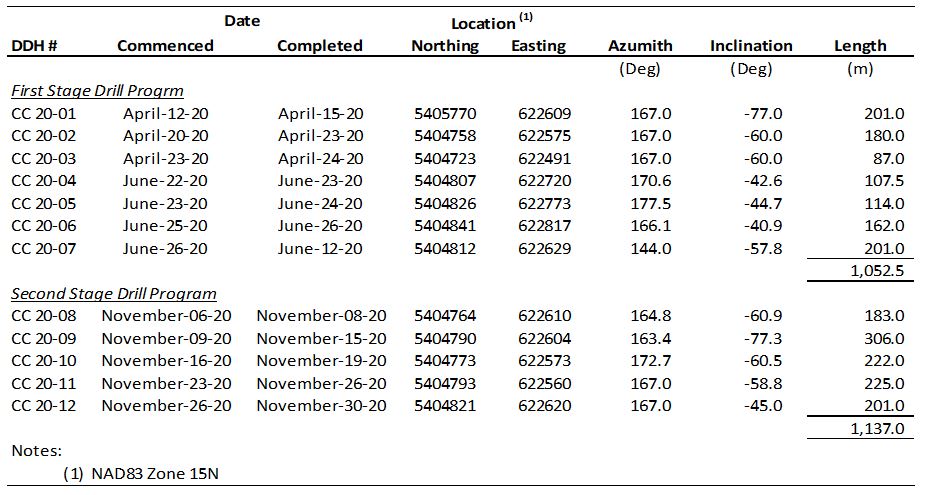 The technical content of this news release has been reviewed and approved by Alex Pleson, P.Geo., who is a Qualified Person as defined by National Instrument 43-101, Standards of Disclosure for Mineral Projects.

Falcon is a Canadian mineral exploration company focused on generating, acquiring, and exploring opportunities in the Americas.  Falcon’s flagship project, the Central Canada Gold Mine, is approximately 20 km south east of Agnico Eagle’s Hammond Reef Gold Deposit which has Measured & Indicated estimated resources of 208 million tonnes containing 4.5 million ounces of gold.  The Hammond Reef gold property lies on the Hammond fault which is a splay off of the Quetico Fault Zone (“QFZ”) and may be the control for the gold deposit.  The Central Gold property lies on a similar major splay of the QFZ.

1935 – With the on-going financial crisis of the Great Depression, the Central Canada Mines was unable to fund operations and the mine ceased operations.

The Company also holds 4 additional projects.  The Camping Lake Gold property in the world-renowned Red Lake mining camp; a 49% interest in the Burton Gold property with Iamgold near Sudbury Ontario; the Spitfire-Sunny Boy Gold Claims near Merritt, B.C.; and most recently, the Springpole West Property near Red Lake, Ontario.

This news release may contain forward looking statements including but not limited to comments regarding the timing and content of upcoming work programs, geological interpretations, receipt of property titles, etc. Forward looking statements address future events and conditions and therefore, involve inherent risks and uncertainties. Actual results may differ materially from those currently anticipated in such statements.

Antimony is a Critical and Strategic Mineral for Canada and the United States November 29, 2022, Vancouver, Canada – Jaxon Mining Inc. (“Jaxon” or the “Company”)

be part of our success.